Apparatus for simulating a “high five” 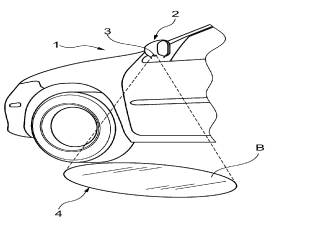 Ford was recently awarded US patent 9,178,371 for a puddle light with status display. The background portion of the patent states that it is generally known to provide puddle lights in certain motor vehicles. Such puddle lights illuminate the immediate surroundings of the vehicle in the dark when the vehicle is being entered or exited.

Electric vehicles are known to have a display for informing a driver of the charge status of the vehicle’s drive battery. Such display is typically in the form of status lights on the dashboard of the vehicle which provide the driver with a visual indication on whether the battery has sufficient charge for a planned journey. Often such status lights, however, do not display the charge status until the driver has switched on the ignition.

The object of the invention is to provide a puddle light for an electric vehicle that displays the status of the charge of the vehicle. Such display must be conspicuous and function without the vehicle being entered and activated.

To that end the patent describes a vehicle with a driver-side exterior mirror which is equipped with a puddle light. The puddle light serves to light an area on the ground underneath the mirror and next to the vehicle. Status information of the vehicle’s drive battery is displayed within the illuminated area.