Valentine’s Day has a long and complicated history. It began as a feast day in the Catholic Church. There were, in fact, more than one saint called Valentinus, but the one that’s THE Saint Valentine was born in about 176. His story is that he spent most of the time preaching and converting pagan Romans. Valentine eventually came to the attention of the Roman Emperor Claudius II, and both men got on until Valentine tried to convert him, whereupon the Emperor condemned him to death. While under arrest one Judge Asterius, Valentine’s jailer, challenged Valentine to prove the validity of his faith, so in response he performed a miracle and restored the sight of the Judge’s adopted blind daughter.

The traditional date of his death and simultaneous martyrdom is 14 February in the year 269, 270 or 273.

According to medieval tradition, birds hook up in February and it seems to be on this flimsy pretext that somehow Saint Valentine came to be associated with love. The writer Geoffrey Chaucer was a big fan, as was the French King Charles the IV, who was the first head of state to officially recognize St. Valentine’s Day. Centuries later the Victorians were exchanging Valentine’s day love notes and gifts. In 1835, two years before Victoria became queen, 60 000 Valentine’s Day cards were posted and by 1840 that number had increased to 400 000.

“Valentine’s Day” is now BIG business. In the UK alone in 2015 almost 2 billion pounds worth of cards, flowers, chocolates and other gifts were exchanged. In the USA, the average annual spend on Valentine’s Day is around $150 per person.

It’s often said that “necessity is the mother of invention” but the lure of money helps a lot too. Given the potential market, it’s not surprising that inventors have been trying to cash in for decades.

US Patent 4993184 filed 13 August 1990 is for a method of growing two living plants into a “Heart-Shaped, Free Standing, Living Horticultural Plant”.

The result, as a work in progress, looks like this: 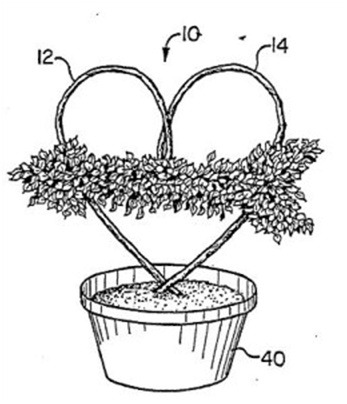 It’s a risky invention, because if the plant dies it might be interpreted as a really bad sign about the quality of the love.

It’s well known that love can make you hungry. With this in mind William C. Arbaugh II came up with this design patent USD491338S1, filed 24 March 2003. It’s for a heart-shaped pepperoni slices.

Not a man to be burdened with small ideas, Arbaugh also filed USD491711S1 on the same day for heart-shaped cheese slices. 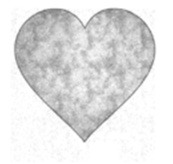 Now, if he had only filed a patent for a heart-shaped pizza pan he could have been really on to something.

Still hungry? Chocolate has become synonymous with Valentine’s Day food, and while you can’t patent chocolate itself, you can register the design of your chocolates. Why? So that you can distinguish you chocolate commercially from that of your competitors. It’s all about branding in the multi-billion dollar chocolate game. 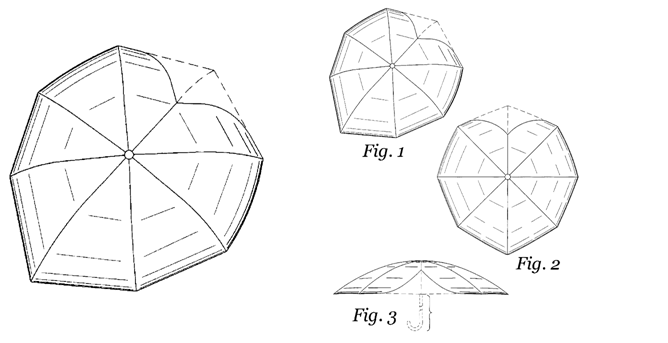 And for that romantic gesture that takes full advantage of modern technology how about EP0555233B1 filed 27 August 1991. It allows you to have a card that records your greeting electronically – for that ultimate in personalization.

So now imagine that you’re an Australian inventor, and you have an idea for something that will give you an “in” into the multi-billion dollar Valentine’s Day industry. You may need to consider patent protection or a registered design in Australia. As it may involve a lot of work which you might not want to do or be suitably qualified to do, it is well worth approaching an Australian patent attorney in Sydney to explain your options. Who knows, you might just have an idea that will give you a slice of that multi-billion dollar, heart-shaped, Valentine’s Day pie?