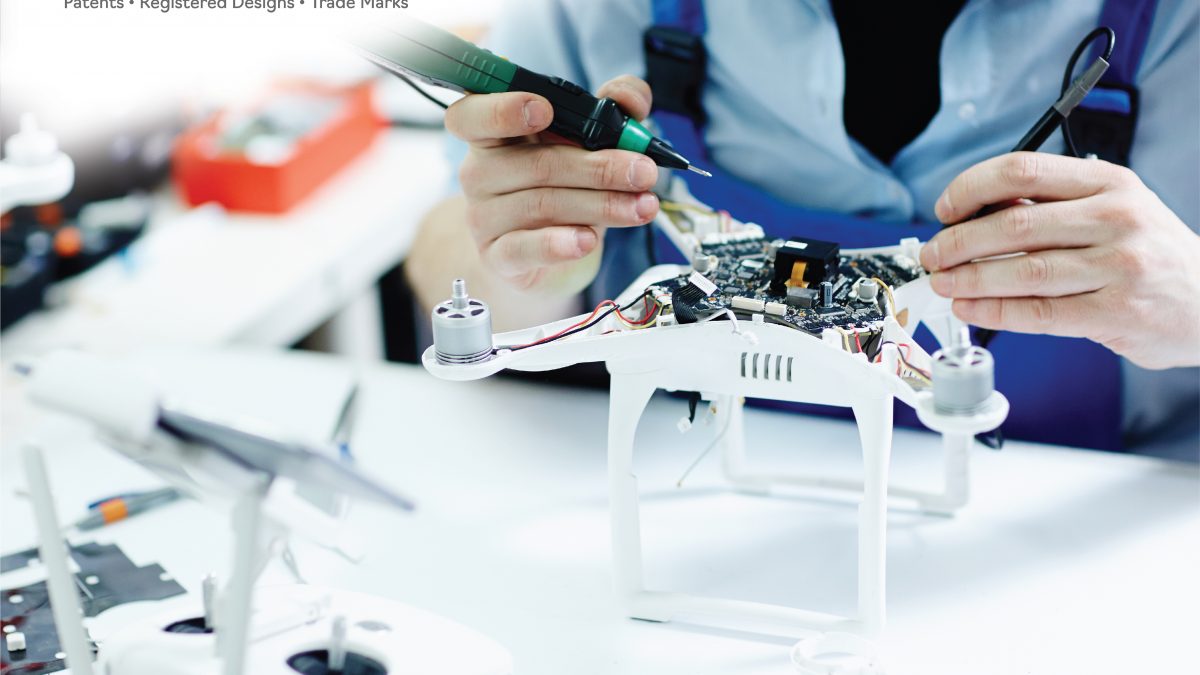 Patent and Trademark of Drones Technology

We didn’t get the flying cars science fiction movies popularised a few decades ago. But what people have now are the next best alternatives – drones.

Drone technology has improved vastly over the last two decades. Many companies and forward-thinking entrepreneurs have seen their potential. They filed patents and trade marks for unique designs and purposes for these multi-purpose machines.

In 2018, around 364 venture capital deals valued at $4.9 billion gave added funding to projects related to robotics and drones. This alone says a lot of how quickly Unmanned Aerial Vehicles (UAVs) are gaining value.

What many people probably don’t know is that drones have existed for almost a hundred years. The U.S. and France first dabbled in the development of unmanned aerial vehicles in that time. Significant developments only happened recently when technology has miniaturised components enough to allow the creation of drones for various uses.

From simple machines that could fly and take pictures for scientific and civil uses, drones are now used in virtually any industry. Specialised drones have made their way to agriculture, some to construction and heavy industries. More types and uses for drones are now being made for rescue, environmental surveillance, military, and law enforcement.

Others have found their home in commercial and personal uses. There, they have become stars in creative, and sometimes funny ways.

Today’s drones are now in the 6th and heading into the 7th generation, soon to be ready for just about anything and everything. Of the various types of drones, quadcopters are the most common. These are drones with four rotors powered by electric motors.

Here are some examples of nifty uses people have commissioned drones to do their bidding.

Drones are light, fast, and immensely versatile. Some drone enthusiasts found a way to use them for the lucrative sports industry. In the past, cameras situated in various parts of a playing field gave viewers fixed angles.

With the advent of drone usage, covering sports events for TV or digital streaming is now more dynamic. Drones can view the action from any place above the field and even follow particular players. This is very helpful for outdoor games with large playing areas such as football or baseball.

Drone enthusiasts around the world have established an entirely new sport: First-Person View (FPV) drone racing. The most popular event for this sport so far is the Drone Racing League, an international competition that’s aired on several TV and digital media networks.

FPV drone racing usually pits custom-built drones made with specific standards through 3D courses in select locations. Human pilots control their drones via remote control, usually paired with a VR headset. Audiences can get a view of the action through cameras mounted on the drones.

It has also found use in high-octane extreme sports such as downhill skiing and rock climbing. Falkor Systems created special UAVs for such sports.

“[Conventional] angles [while filming] don’t reach the level of intimacy possible only with an autonomous aerial drone.” Falkor Systems CEO Sameer Parekh says. He describes the skiing experience with it: “You deploy it, fly it, and it follows you downhill. Afterwards you just get back on the lift with the drone in your backpack,” he adds.

Speaking of the large-scale events, drones are now being recruited into the events industry. They’ve found new tasks in live concerts, synchronised light shows, and other outdoor performances.  For light shows, specialised quadcopters can be fitted with components for projecting light and programmed to make dazzling patterns. Even tech giants like Intel have invested in this new show business.

During live concerts, UAVs also provide auxiliary footage for concert-goers. Concert producers use the drones to take crazy angles and snaps of the crowd or stage and project them to large LED screens. This can heighten the experience for the attendees.

Those wanting a calmer kind of aerial entertainment through stunning visuals get their dose through drone tourism. Tough, long-range drones capture breathtaking footage of landscapes such as mountains, plains, and are manoeuvrable enough to fly around forests and hills.

Special accessories such as Virtual Reality (VR) goggles can amplify the experience. An invention by Dr Helmut Hlavacs of the University of Vienna connected a high-definition video drone to a custom VR helm. The biggest aspect of his setup, he says, is inclusion: “People who can’t travel, have disabilities, or for any reason do not have the time to be in the actual place.”

Big-name firms such as Disney were also reported to have filed patents for that use drone technology for their theme parks. The company’s stated drone usage is focused on aerial entertainment. From floating screen holders, remote character carriers, to smoke-free “fireworks,” Disney’s imaginative use of drones, if implemented, will surely be unique trade marks.

UAVs are also being used for transport purposes in various ways. For instance, food companies are riding the drone hype train by utilising them for delivery services.

Contemporary restaurant Yo! Sushi once used the flying machines as novel waiters in 2013. The London-based chain installed special serving trays on small quadcopters that deliver orders of their Yo Burger to customers at their tables. They called it the “iTray,” the waitstaff “pilots” the miniature flying waiter through a Wi-Fi connected tablet. Two high definition cameras mounted on the drone allow staff in the kitchen to know when the meal has been served. Robin Rowland, the company’s CEO, describes the project: “Yo! Sushi is all about delivering a whole concept in an unusual and exciting way,” he said.

However due to lots of airspace laws and constraints, food delivery is still not a mature field of business. It’s getting close, however. Test runs and small-scale services in select towns by drone companies such as Flytrex and partner restaurants are making breakthroughs.

When it comes to dreams though, some companies go the extra mile.

Flight laws can’t stop tech giant IBM from filing a patent for a drone-powered coffee delivery system. According to the patent description, the service “identifies the cognitive state” of office workers and offers them cups of coffee on an “unspooling string.”

IBM goes as far as specifying various types of delivery for this system. Options range from direct dispensing into a mug to lowering a sealed bag. The company suggests equipping the drone with sensors that can remotely detect blood pressure, pupil dilation, and facial expressions. These factors, IBM says, will help them gauge which individual might be needing the caffeine kick soonest.

For now, the company is currently focused on Artificial Intelligence and Machine Learning. But who knows if they might just push through with their drone program? Time will tell.

Aside from food, parcels and other items can be delivered by drones from door to door. One noteworthy project is Amazon’s unmanned delivery system, Prime Air. While the service is not yet commercially active, Amazon’s plan is to get packages to customers within 30 minutes. The company has been working on several drone builds and have done lots of test runs with select shoppers.

Drones are now also in use in search and rescue operations, both in private and government sectors. For car manufacturer Ford and its innovative engineers, drones can also provide an extra safety feature for their vehicles.

In Ford’s patent filed to the US Patent Office, the miniature quadcopter can be deployed from the vehicle’s trunk. It could be launched from any vehicle type- a sedan, SUV, or crossover, and provide safety-related functions.

Some of the functions are: a beacon for responders in case of a crash, a video tracker, and security patrolling. These could be incredibly useful for individuals who frequently go on cross-country journeys. The drones can also be used flexibly for extra precautions on unpredictable terrain. If there’s one thing for sure, Ford’s engineers are surely putting safety first.

Drones are a remarkable new addition to humanity’s set of tools. They may be the prelude to more complex machines we can build tomorrow. For now, the uses for drones might be limited, but their multi-purpose nature will surely bring them beyond utility, delivery, and aerial entertainment.

Surely, patents and trade marks for drone usage will increase in the coming years. It will be only a matter of time before drone technology matures and related regulations catch up. When that moment comes, specialised drones will be as incredible as the flying cars we envisioned in the decades before.