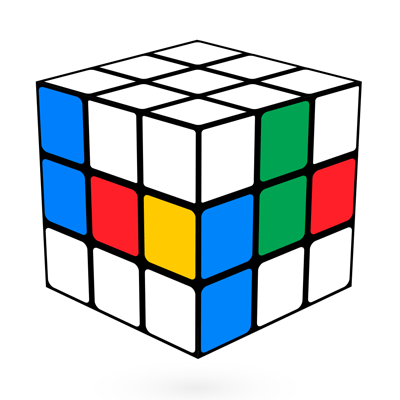 One of the world’s most popular puzzles began life in a much simpler version than the one we’re used to. In March 1970, Canadian inventor Larry Nichols filed a patent application for a 2 x 2 x 2 cube puzzle made up of a cube of 8 smaller cubes. This arrangement was held together with magnets. Nichols received a UK patent on 16 January 1972. In retrospect its easy to see that you can cheat the puzzle simply by pulling it apart, but at least the basic idea was there.

Two years later, Hungarian Erno Rubik was working at the Academy of Applied Arts and Crafts in Budapest, in the Department of Interior Design. Rubik had set himself a challenge to create a mechanism of 27 cubes, arranged in a larger 3 x 3 x 3 cube in such a way that the edges could all rotate a full 360º, but without the whole mechanism falling apart. Each surface of the larger cube had a different colour in order to keep track of how well the sides were rotating. It was only when Rubik solved the structural problem, scrambled the different coloured surfaces and then tried to restore the cube to its original configuration that he realised that he had accidently discovered a puzzle. And because the puzzle relied on interlocking plastic pieces that were difficult to pull apart, it was hard to cheat. Rubik then obtained a patent in Hungary for his ‘Magic Cube’. Rubik struck a deal with the Ideal Toy Corporation to manufacture the cube and it sold well in its native country. Then, in late 1979, Rubik and Ideal decided to launch the cube to the world. It made its international toy fairs in London, Paris and New York in early 1980.

The cube was an almost instant hit. Something about a cube with rotating sides that mysteriously failed to fall about, something about a puzzle with with over 43 quintillion configurations that could nevertheless still be solve, something about the appeal of complexity hidden in simplicity, just captured the public’s imagination. The now renamed and rebranded Rubik’s Cube sold better than hot cakes. It created a cult following. It created its own specialised vocabulary including a new word ‘speedcubing’ —the skill and challenge of solving the cube in minimal time. Lucas Ettar of the United States, solved a 3 x 3 cube in 4.9 seconds in 2015 for a single, one-off instance. Perhaps the the cube’s great popularity came because it makes it cool to be a nerd.

From the beginning the demand was so great that Ideal couldn’t keep up supply, so a whole bunch of bootleg copies started going into circulation.

Intriguingly, in spite of both Nichols’ and Rubik’s care secure patent and trademark registrations in their native countries, Nichols, Rubik and Ideal failed in registering a trademark anywhere else in the world.

The result was a bit of a legal nightmare. Nichols and his employer, Moleculon Research Group sued Ideal in 1982. After a court case and an appeal Ideal was found guilty of infringing Nichols patent with a pocket-sized 2 x 2 x 2 cube, but not of infringement with the 3 x 3 x 3 cube.

Unbeknown to both Nichols and Rubik, in 1976, self-taught Japanese engineer TerutoshiIshigi had been granted a Japanese patent for a mechanism that was almost identical to Rubik’s. Whether Ishigi knew of Rubik’s design and improved it, or whether, as so often happens in the history of invention, the idea independently arose in Ishigi’s mind is a matter of some speculation.

Goaded by their experience with Nichols, Rubik and Ideal quickly filed for more patents and the US patent was granted in 1983.

While defending your intellectual property is hard enough at times, it’s made more difficult when you have inadequate legal protection in place.

Even though all his patents have now long expired, It’s hard to imagine how much money Rubik and Ideal lost to copycats and bootleggers by failing to protect their investment when it was at the height of its popularity. The Rubik cube has been a huge success even in Australia, in fact two Cube records are held in Australia.If Rubik and Ideal had sought the advice of an Australian patent attorney or a registered patent agent they would certainly have stopped people violating their rights, at least in Australia, at the peak when they would have needed it the most.

At least they were more successful in securingtrademark registrations. No one can market a 3-D, rotating cube puzzle or even represent one in 2-D or 3-D visualizations and use the words Rubik and Rubik’s in association with it without the express permission of Rubik’s Brand Ltd.