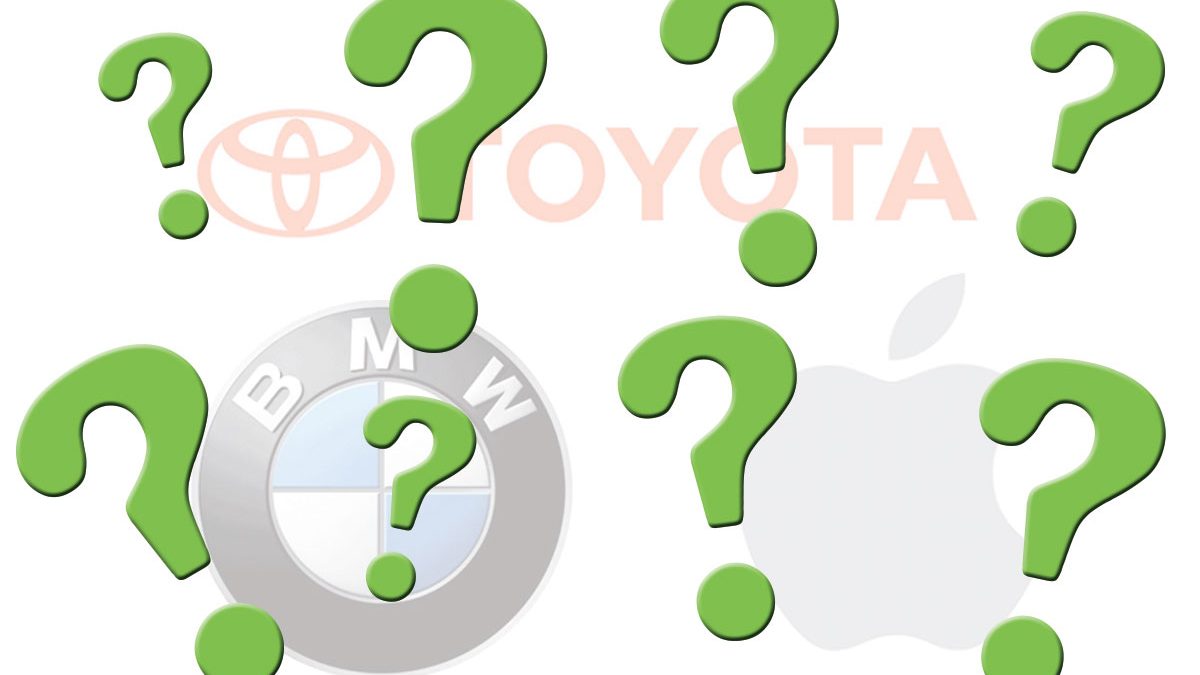 There was a time when people didn’t even know what a logo was. The word is actually short for “logotype” and derives, as so many of the fancier English words, from two ancient Greek word, “logos” meaning “word” and “tupein” meaning to “strike” or “to make an impression”. So … stretching the meaning just a little bit, a logo could be taken to mean a word that makes an impression – which is exactly what they’re made to do. Naturally, the evolution of the logo has meant that sometimes the word isn’t even a word anymore but just a symbol. The more recognizable that that symbol is, the more that it makes an impression, the more successful that symbol is.
Some logos have become more iconic (another Greek word!) than others. And some have hidden meanings that you might not guess just by looking at them. Here then, are a few interesting examples:

The history of the Toyota name is detailed and interesting and worthy of its own blog post because it illustrates a lot of the thinking that goes into the creation of a powerful brand. Even the emblem has its story. In their own words from their website:

“There are three ovals in the new logo that are combined in a horizontally symmetrical configuration. The two perpendicular ovals inside the larger oval represent the heart of the customer and the heart of the company. They are overlapped to represent a mutually beneficial relationship and trust between each other.

The overlapping of the two perpendicular ovals inside the outer oval symbolize “T” for Toyota, as well as a steering wheel, representing the vehicle itself. The outer oval symbolizes the world embracing Toyota. Each oval is contoured with different stroke thicknesses, similar to the “brush” art known in Japanese culture.”

What is arguably one of the most recognized logos in the world, renowned for its elegant simplicity, started off in 1976 as a much more complicated image with allusions to the Isaac Newton’s falling apple as the inspiration of genius. Another fascinating story worthy of longer treatment. The modern logo dates from 1976 and alludes to the apple from “The Tree of Knowledge”. The bite was put in so that people wouldn’t confuse the apple for a tomato!

BayerischeMotorenWerke – Bavarian Motor Works or BMW to the rest of us has a logo that represents the origins of the company as a manufacturer of aircraft before they started making the cars that they are now much more famous for.

This logo relies on colour for it to work.

The white represents the blur of a turning propeller. The blue is the background sky peeking through. It all makes sense now, doesn’t it? If you’re planning to register a logo in Australia the applicable body is IP (Intellectual Property) Australia. But logos aren’t the only thing that can be trademarks. Company names, the names of specific inventions, products or services can also be trademarked. The value of devising names and logos is to distinguish yourself from your competition and to protect your brand. Trade marks and logos are business shorthand for – “When you see this word or symbol it stands for a particular quality of product or service. It stands for a particular experience.” Trademarks also tell the world – “If you try to pass off your brands and services with symbols and names that we own, you’re committing a type of fraud. You’re parasitizing our hard-won reputation and brand-building to pass your stuff off as ours and we won’t stand for it.” Companies are very protective of their logos for this reason. It can take decades and millions of dollars to build a brand so that members of the public can make instant associations between a symbol and what it stands for. If you’re planning to build a business and a brand, you should be equally protective of what you create. Like so much else in the world of commerce, making sure you’re covered can be a tricky business, full of traps for the naïve and the unwary. It’s a good idea to engage the services of an intellectual property specialist or lawyer to ensure that you’re legally covered in the right way, without overspending time of money and without inadvertently missing something that might seem minor, but might be very important later on.