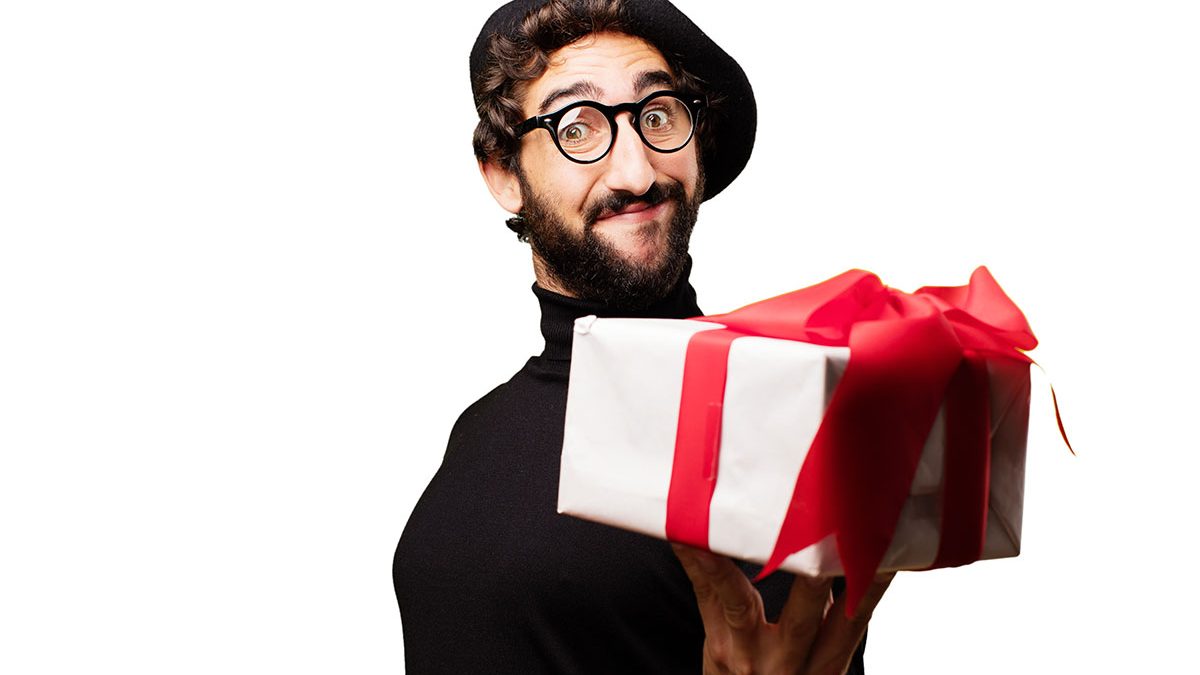 Yes, it’s that time of the year again. Christmas has over the centuries attracted inventors and innovators hoping to make it more fun. Christmas patents are dominated by American inventors, but the principles involved in sound patenting apply just as much to Australian patent registration too.
Here then, are twelve patents that represent innovations created in the spirit of Christmas.

While natural Christmas Trees look and smell great they have several disadvantages, the most apparent of which is that they shed needles and create a huge mess and even worse, they’re not reusable, so artificial Christmas trees always had considerable commercial potential. Early Christmas artificial tree patents date from the first years of the 20th Century. Aesthetically, they had varying degrees of success.
US Patent 994 248 from 1911 looks like a drying rack. 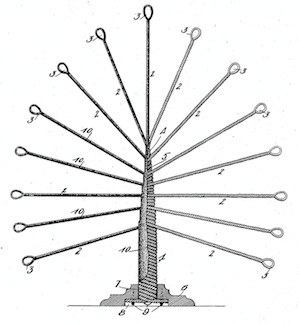 US Patent 1 577 207 from 1926 is made from a set of pre-cut plywood pieces that gives it a sort of proto-Ikea look. It was designed for display windows in department stores and had shelves that you could put sale items on.

It wasn’t until 1927 that somebody came up with something that at least pays some lip-service to looking “natural”. Like all modern Christmas trees, it had another advantage that real ones don’t have. It was collapsible for ease of storage. 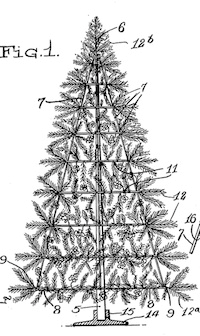 US Patent 1 791 533 from 1931 takes advantage of a greater confidence in the then-new practice of making things from plastic and using them in electrical devices. This is basically a small plastic Christmas Tree with lights. It was also, supposedly, water proof. 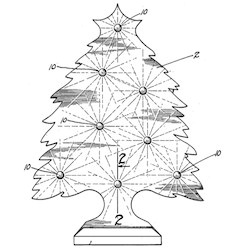 Then there is, of course, tinsel. You’ve probably never wondered until now how tinsel is made, and no, the answer isn’t “elves”. There are actually specialised machines that make it and this patent, Number 2 031 566 from 1936 is one such device. 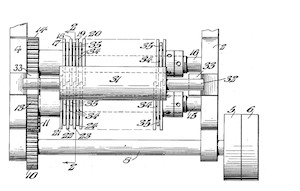 US Patent Number 2 110 353 from 1938 might look boring, but it’s historically significant as the first application of using a set of cords deliberately as Christmas tree lights. It’s also the origin of millions of lost hours devoted to finding blown lights because, when lights are arranged in a series, when one light blows, all the other lights go out too.

The origins of “kissing under the mistletoe” for luck are lost to history. All we can say for sure is that the parasitic plant was sacred to the Druids and might have played some part in their Winter Solstice Celebration. Inventions along this theme seem are frivolous, but the inventors must have seen at least some commercial potential.
US Patent 4 488 316 from 1983 is a “Mistletoe Supporting Headband” for the man who wants to do some mobile Christmas stalking. 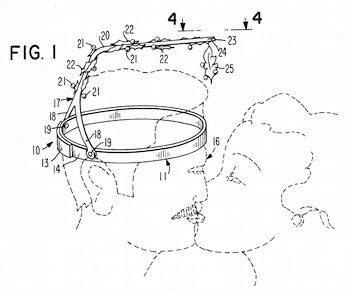 US Patent Application 2002 012 6506 from 2002 is for a Hanging “mistletoe” ornament that incorporates a motion sensor to detect someone who’s under it and then puts on a light show and plays music. 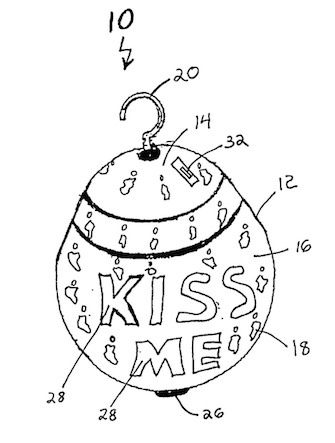 US Patent D 407 189 is an example of a design patent (referred to a registered design in Australia). Usually, when we think of patents, we think of protecting the way an inventor has solved a problem, so the emphasis is on how something works. With a design patent, the emphasis is on how something looks, which, as any fashion designer will tell you, can have huge commercial value, which is probably what was in the mind of the inventor of the “Kiss Me” cap.

Where would Christmas be without kids and their toys? You could fill volumes with the records of toy patents and if you’re an inventor who’s seriously interested in commercial potential then toys are the way to go. If you have a truly brilliant toy idea you will have to protect that invention with a patent registered with the help of a qualified patent attorney to insure, as much as possible, that your invention is safe from commercial theft. The potential rewards are enormous, as these top three Christmas patents show. Intriguingly, all these toys demonstrate that an invention doesn’t have to be complicated to work, it just has to be original and attractive.
US patent 2 415 012 1947, The Slinky, remains one of the most popular toys ever. 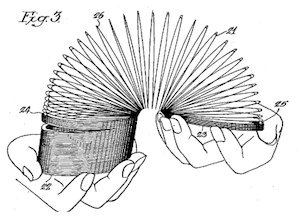 Californian company Wham-O hit gold with US Patent 3 079 728 from 1958 when it sold 25 million units of the Hula Hoop in its first four months of release. 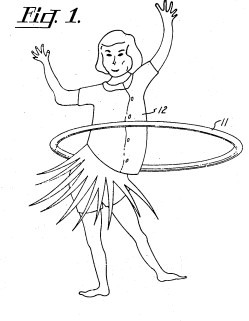 And Wham-O hit gold again in 1967 with patent 3 359 678. The Frisbee was an aerodynamic (and safety) improvement on the pie tin lids people used to throw at each other (and still do sometimes).